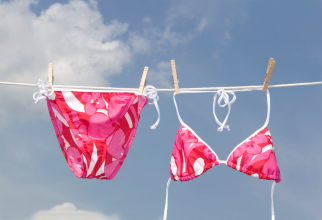 Bikinis seem to be a way of life during Australian summers, but I’ve decided you won’t see me in one.

I’ve had people suggest that perhaps the reason that I’m never seen in these ‘barely there’ bits of frills and lycra is because I’m ashamed of my body, or lacking in confidence. It isn’t.

To be honest, the reason you won’t find me baring it all at the beach, along with everyone else, comes down to my Christian fatih. And, hard as it is at times, that means that I don’t always follow culture.

The Bible consistently calls for a radical standard from its followers and when it calls for women to dress modestly… well try as I might, I just can’t find anything modest about the bikini.

My body was not created to be flaunted to the world. It was created first as a temple of the Holy Spirit and then for the eyes of one man. Not because I couldn’t enjoy the attention of dozens, but because I was called to a radical standard.

I think that as Christians it’s really important that we don’t judge others who don’t agree with our standards. That’s not our job, but that doesn’t mean we can’t stand for what we believe in.

So this year, I’m making a stand for elegance and modesty, and I know there are a lot of girls out there who will be joining me.

(For a really interesting look at the evolution of the Bikini and the way in which it has affected our society, check out Jessica Rey’s talk here.)